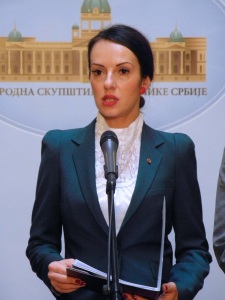 MPs in young parliamentary democracies are often being exposed to comparative examples of good practices. Also, international organizations initiate and facilitate development of an initiative, as was the case with our GOPAC Chapter in Serbia. Having in mind hectic schedule of MPs in accession countries, with a huge number of laws being passed and the limited capacity and funds allotted to the Parliament, the role of international organizations with demand-driven initiatives and strong ownership may be crucial for creating successful initiatives and sustainable networks.

The will of peoples is naturally implied through their representatives (MPs). Securing the utmost transparency of the parliament is something natural and expected in modern parliamentary democracies. We have secured full transparency through live streaming of all sessions and events in the Parliament, and we invited citizens to follow and take part in public hearings. Our work in GOPAC is extended not only to work within the Parliament, for e.g. through public hearings that our Chapter proposed and promoting GOPAC’s mission during plenary sessions, but also through working with independent scrutiny bodies such as State Audit Institution, as well as civil society organizations such as Transparency International.

It is a personal effort one has to invest, followed by the assistance of institutions and international organizations necessary to set-up the system. From there on, the MPs network and continue their work based on the issues presented to them. We participated in the conference that took place in Moldova where we met other colleagues, where we discussed about interesting and inspiring idea to form the regional GOPAC Chapter. We believe that MPs are the best ambassadors to promote the culture of transparency and accountability, which is derived from their representative and scrutiny role. The spill over to civil society and citizens may be observed within one country, when topics of general interest are raised and addressed in the Parliament and media, but also to regional effect where countries that share similar background can exchange experiences and engage in the peer-to-peer learning.

We live in the era of open governance and the Parliament, the supreme state institution with vested control function, should lead the way in forming these partnerships.
Since the establishment of a GOPAC Chapter in Serbia (a young Chapter which exists somewhat over a year), we created a possibility for collaboration of parliamentarians coming from different nations, and at the global level, especially in the field of fight against corruption.

Naturally, corruption is a plague that erodes different parts within one nation state, as well as the entities and factors who enforce and carry out this fight.
Working together is thus essential, precisely because nowadays problems of any kind cannot be viewed in isolation, at the national level, but rather at the level where cooperation, support and mutual assistance is needed. This is exactly where the power of collaboration is reflected. That cooperation may result in signing of bilateral agreements, adopting joint resolutions and similar acts. Ultimately, working together should result in fulfilling common interests. And since the solution to every problem is preceded by its analysis, such joint sessions are extremely important. I believe that these sessions should be held more often in order for this debate to produce concrete results and fulfill its objectives.

Possibilities of collaboration in strengthening the tools for assessment, training and education should not be questioned, because it must exist and be well established. If famous quote of Ernest Hemingway – “No man is in itself a continent” – would be translated into the language of politics, then we could say that no country by itself is sufficient, hermetically sealed, or can be viewed in isolation, without synergies and its relations with other countries. We have to express satisfaction both because GOPAC exists, as well as because it’s Chapter in Serbia is established. So far we have been able to discuss with our colleagues from other national chapters, exchange experiences, and work on finding the ways to implement good practices in the work of the GOPAC Chapter in Serbia. We want to continuously strengthen the awareness of parliamentarians not only about their role, but also about the importance of participation in the fight against corruption. As they are representatives of the people, and since they exercise the supreme legislative authority, they are primarily responsible to deal with analysis, but also to provide the modalities, means and ways of solving problems.

In Serbia, the tools and mechanisms available to parliamentarians exist more on the declarative level than in real terms. And that is why we appreciate to hear the experiences of our counterparts from Canada and the USA, as they come from far more developed and advanced countries. For example, I believe that the establishment of the Agency for Security Investments in Serbia represents a significant blow to corruption.

Serbian path towards European integration implies a decisive fight against corruption, which is reflected in the adoption of the National Anti-Corruption Strategy and the Action Plan for its implementation. Similarly, the adoption of legislation in the Parliament with a strong anti-corruption potential is exactly the place where MPs could give their contribution in the fight against corruption as law proponents, as well as initiators of amendments which could promptly correct bad statutory provisions.

Finally, I would like to use the opportunity and mention that parliamentarians in Serbia show ever more engagement in the fight against corruption, which is also evidenced by the increased membership in the GOPAC Chapter. Current MPs, as well as the future ones, should continue to act together. Even though they come from different political parties, in the work of GOPAC they are not spokespersons or “advertisers” of their political beliefs and opinions, but rather they are clearly focused on what is the essence of the GOPAC action: the fight against corruption.